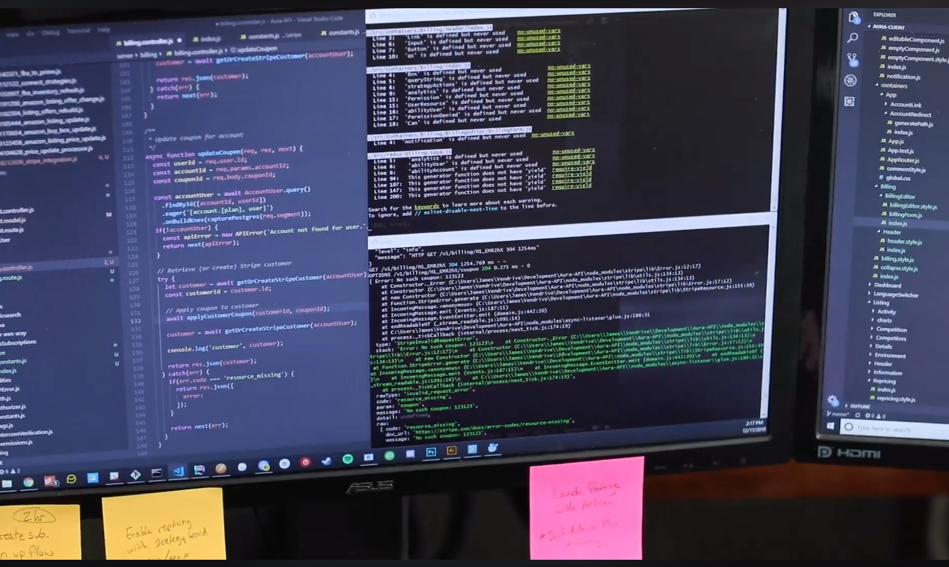 A successful FBA seller is most likely using an Amazon Buy Box software to help them grow. This usually means an Amazon repricer that uses a formula to maintain your products placement in the Buy Box. In addition, when your competitors prices change, the AI-driven engine will quickly change your price. Can this be so? Well, all the users wouldn’t be raving about it if it wasn’t. So how does it work exactly and “Can I try before I buy?” – sure can!

The subject is Aura. A powerful Amazon repricer that will grow your sales by not only getting you in the Buy Box, but helping you stay there! Developed by a successful FBA seller who is a software engineer, James Yanyuk, Aura is the top performing repricer in the industry as of 2019. But a dedicated team of brains will ensure you that it remains to outperform itself and only get better with its machine learning. Frankly, the software can be talked about endlessly, but unless you see it in action – all of this is just words.

You product may be Buy Box eligible, but never there. Why? Well, perhaps your competitor is using a repricer and it’s in their best interest to make sure you don’t come close. But how do we sell and compete in a free market like that? The solution is for you to do the same, but in a better way. Some reprices out there such as ReprcierExpress, xSellco, Feedvisor, Bqool & Informed may have been around longer, but so was Ford and that’s certainly not the best automobile out there. Why not try a repricer that is proven to be the best Buy Buy software by top Amazon sellers such as Larry Lubarsky? What does Aura have to offer that’s better than any other repricer?

Did you see that there? Inventory Lab Integration! That’s right. Aura Repricer already connects to your Seller Central account with 1 toggle, but add InventoryLab to that and you have that much more power in your fingertips! All of your minimum and maximum price settings, accurate analytics and of course inventory management all simultaneously working to make you more money. How much more exactly?

On average, Amazon sellers see an increase of 40% in sales in just days after using Aura. Facebook groups such as “Amazon FBA Wholesale” do not stop raving about it. It’s that good. One simply cannot take selling on Amazon to the next level without the use of a good repricer or Buy Box software. Not to mention one that has a proven track record and is constantly improving. Start your free trial today and see your sales soar! 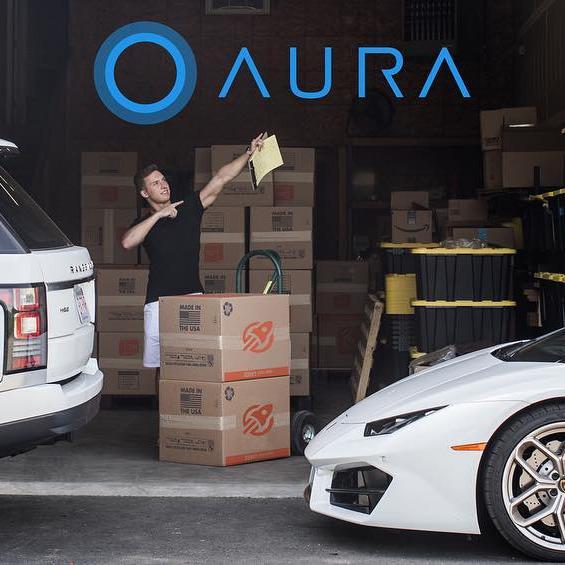 To start selling on Amazon isn’t everything. In fact, you may even not sell anything for months if you don’t know what you’re doing. I got into Amazon first by selling books. After all, that’s how Amazon started. Quickly online marketplace grew and now has over 100 million online shoppers! Surely this opened countless opportunities for many sellers, but there’s one thing that did not change: competition. Offline or online, you will always have completion. And so there are specifics that you can follow to stay ahead. One of them, using an Amazon repricing software.

What is Amazon Repricing Software

Aura Amazon repricing software is designed to work in the background and achieve exceptional growth. How? Getting in the Buy Box and staying there. A very important part of selling on Amazon is being Buy Box eligible and competing for it by price. While there are many factors that contribute to this, price is the one many get stuck on. Why? It’s hard to manage while trying to make profit. A level of intelligence is needed that is hard to calculate manually. This is why Aura is built on artificial intelligence and runs on machine learning. Analyzing competition SKU’s and thousands of products in real time while maintaining the set minimum and maximum price by the seller – you. This is where the backend comes into play. A beautiful UI designer to keep you focused on what’s important and it doing everything else behind scenes.

How Does Aura Work

Aura connects to your Amazon central account and you’re up and running within minutes. The entire goal is automatically reprice your SKU’s or products to maintain your Buy Box status. This is of course occurring when another product’s price is decreased. Naturally, you may think that this will make you lose profits, but Aura is much smarter than that. The goal here is to increase your sales. While yes, you may be losing in profit per item, but we’re talking pennies here in exchange for 40-70% more sales! Once you take everything into account, you can be assured you’ll need more capital to move more product.

Aura is a continuous Repricer that is powered by AI – artificial machine learning. An engine that no other repricing software can compare to because the linger it works, the smarter it gets. Being fully integrated with Inventory Lab, your prices are synced and the imports give you clear analytics. I am amazed by this Amazon repricing software and I want you to give it a go at goaura.com

Aura is hands down the best Amazon Repricer of 2019. A tool that took almost a year to develop by an Amazon FBA seller and a brilliant coder, is now available to all amazon sellers – big & small. Integrated with the leading inventory software InventoryLab, Aura links to your Amazon central account with a switch of a toggle and works tirelessly around the clock to get you in the Buy Box. Being 15 times faster than the leading competitor, the repricing events are nearly real-time allowing no product to come close. Built on an AI infrastructure, the powerful Repricer is not only the fastest, but also the smartest. Aura is a monster machine with a shiny user interface that is simple to use, but once you open the hood – the code is unreadable. Continue reading to find out how amazon sellers see an increase of 40% in sales on average!

As with most online software, the “try before you buy” motto applies here because the makers of Aura are confident in their product. Aura was originally developed for private use to outcompete other SKU’s that kept winning the Buy Box. But after the massive potential was realized, the maker decided to bring it to the public. With the power of internet, anyone and everyone can research any product, call out what’s real and fake and see reviews for themselves. But nothing beats actually trying the Repricer and seeing if it works for you. This is why you really can’t lose with Aura.

Before even talking about the Buy Box, you just first be eligible as a seller. The requirements are outlined by Amazon. Once eligible, multiple factors contribute to you being awarded the Buy Box. At the end of the day, everyone will strive and eventually be on the same level except one thing: price. This is where the sellers compete! With Aura, the Repricer is intelligent and knows how to make you money. With so many gears working behind scenes, your path to winning the Buy Box has never been closer than it is with Aura.

With a monthly plan starting at $97, most users have this pay for itself within minutes! And when you sign up for an annual plan, the price turns out to be $77/month. Thats 20% off! All powerful features in the top of your finger from analytics to InventoryLab integration. What programmers and Amazon sellers worked on for months, you can now get by easily signing up on goaura.com

You shouldn’t take anyone’s word for something like this, but if you hear about Aura in every Facebook group and group there, it just be good. Why else would someone like InventoryLab choose to integrate them within their platform? There are certainly dozens of Amazon repricers to choose from, but no – Aura leads the way. With comments ranging from sellers switching to Aura from other repricers to those that share their screenshots of the dashboard and the astronomical increase in sales, there is just too much good that is said. Hosted on Amazon servers, AWS, Aura pairs well with the retail marketplace. So what are you waiting for? Get Aura to automate your pricing and increase your sales. 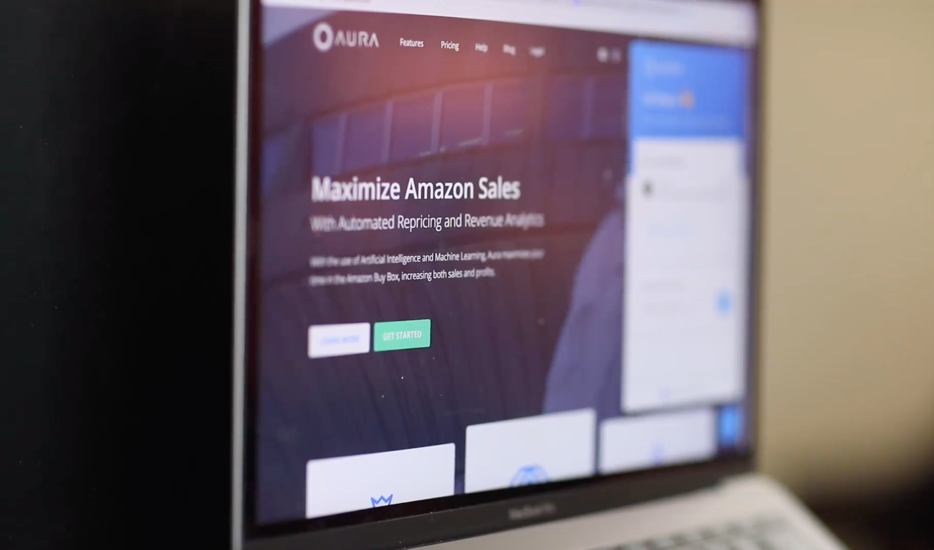 Amazon seller’s industry demands an Amazon pricing tool that goes beyond basic analytics. The data and control provided in the amazon seller central account is not enough. Knowing how to set the price of your product to turn a product or even automatically adjusting the price is a given, but how does one outsmart the competition and obtains the edge? What tool is necessary to bring your business to a level where you can feel your income growing and ability to make your big dreams come true? These questions and more are answered here today. Right now. Every successful Amazon FBA seller uses it and each one has at least 1 product dominating the Amazon Buy Box. I present to you: Aura – Amazon Repricer, the most advanced Amazon pricing tool responsible for millions of sales.

The independent-use software-turned-public and integrated with InventoryLab was created by James Yanyuk. A college student studying computer science while selling on Amazon on a side. When you’re Buy Box eligible meeting all criteria from feedback to seller status, your competitors price keeps adjusting in speeds you’re not able to keep up with. Is someone changing the prices of their SKU’s manually? Are you being targeted? How many employees does the seller have to be able to keep up with so much? Talk about micro-managing. But what if I told you all of that is being done by 1 program that is completely automated? Not only that, it is powered by Artificial Intelligence. Machine learning means only getting smarter and processes millions of calculations a second. Talk about performance. That’s what Aura does. With a click of a button, you connect your Amazon seller central account and automatically import all of your products. Define min and max prices and it goes to work for you. The powerful Amazon pricing tool will change the prices according to your settings and events of other products to maximize your profits. This is the tool that every Amazon seller’s success depends on.

And then there’s that. Time management. It may seem simple and basic to many, but doesn’t change the fact that the most valuable thing we have on earth is time. Much of it converts to money or vice versa. It’s an investment many wish they could make. To replace 1, 2 perhaps 3 employees to gain time and have the work put in efficiently. A software that works around the clock, without any breaks or emotions. This commodity alone is worth it. It may very well be the first step you take to realizing that taking your business to the next level requires managing your time properly.

Aura goes to work the moment you sign up (free trial) and connect your account. Most users see results within a few days and the week or two you’re testing the software, you’re already selling that much more and all of a sudden that subscription price is justified. You can compare competitors such as Bqool pricing and quickly come to your own conclusion. Your doubts of Amazon automated pricing not working will be eliminated and you’ll be on your journey of growth. This is what Aura does. These are the results shared by satisfied Amazon sellers using Aura. On average, Aura users see an increase of 40% in sales and the screenshots don’t lie. Start your free trial today at GoAura.com.